Authors Mark Charles and Soong-Chan Rah’s Unsettling Truths: The Ongoing, Dehumanizing Legacy of the Doctrine of Discovery, offers an essential examination of the historical journey of how the Doctrine of Discovery played, and continues to play, a crucial part in shaping the American psyche and the collective comprehension of its past as a country. 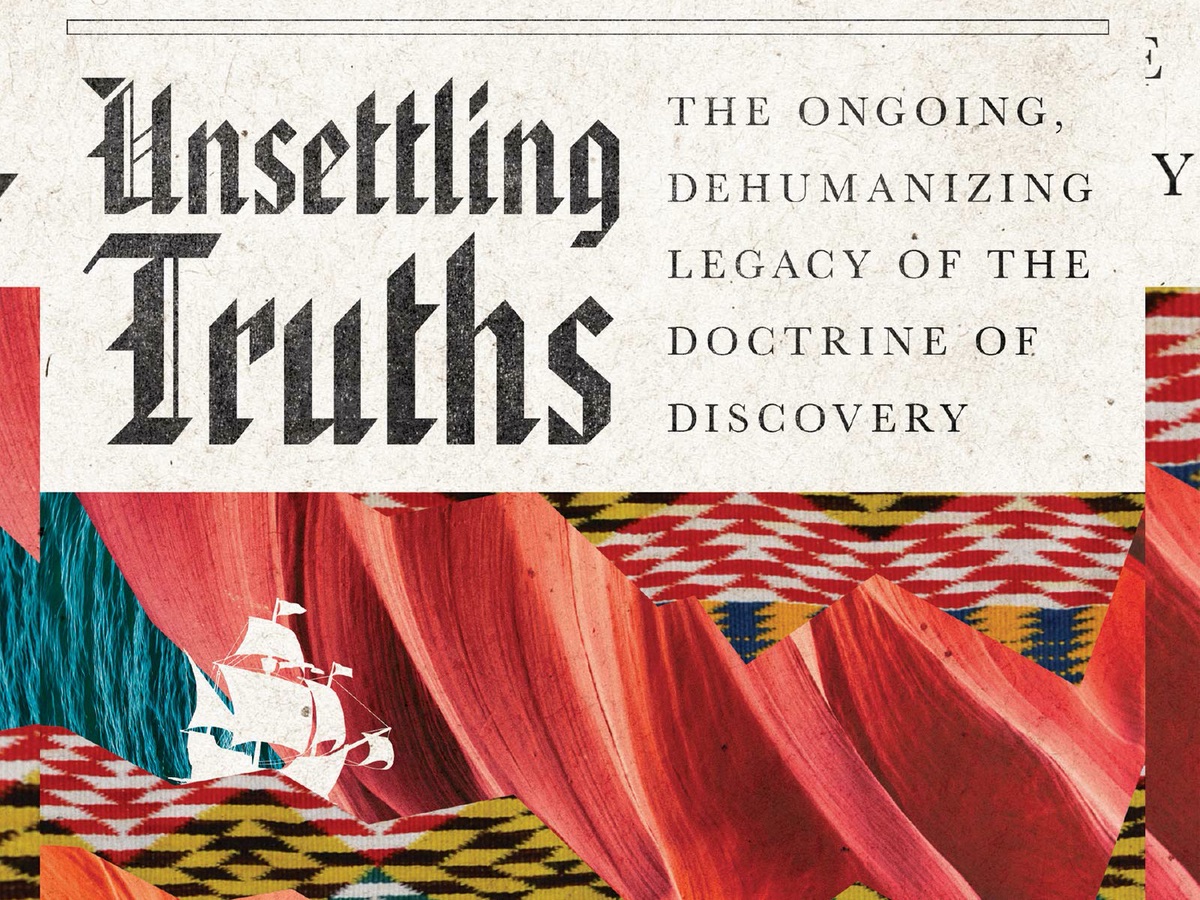 The early formation of America as a nation, from its “discovery” to subsequent colonization by European powers, has been met with conflicting viewpoints.

Until recently, many non-Indigenous individuals historically viewed their European ancestral arrival as a relatively nondisruptive process. In their eyes,  their ancestors had directly confronted an untamed wilderness devoid of human interaction with that of its original inhabitants.

This incorrect comprehension of the past has customarily been the narrative shared time and time again. Examination surrounding the systemic mechanisms that allowed for this continent to be duly “tamed” rarely deemed these to be acts of American imperialism.

Coupled with political, religious, and legal justifications deriving from the Doctrine of Discovery, seizure of lands not inhabited by Christians prevailed, whereas the narrative of the original inhabitants of the land were diminished or omitted from history altogether.

Authors Mark Charles and Soong-Chan Rah’s Unsettling Truths: The Ongoing, Dehumanizing Legacy of the Doctrine of Discovery, offers an essential examination of the historical journey of how the Doctrine of Discovery played, and continues to play, a crucial part in shaping the American psyche and the collective comprehension of its past as a country.

The book opens with a well-articulated look into the power of imagination, and the critical role it plays in defining how and what a nation believes itself to be. From figures such as Christopher Columbus, to holidays such as Thanksgiving, Charles and Rah examine the contemporary implications in using historical falsities to create socially constructed realities, many of which are based upon the intense promotion of white supremacy.

This particular approach towards discerning history led to the diminishment, and other times, complete removal of Indigenous peoples, and fellow minorities, throughout American history. Such an evaluation by the authors is incredibly perceptive, encouraging readers to deeply contemplate where this country is in addressing the methodologies of white supremacy and the remnants that permeate American society today.

Furthering this discussion on the power of imagination, an exploration of the history of the Roman Emperor Constantine ensues, revealing his role in re-imagining Christianity through the lens of Roman Imperialism. Upon winning the Battle of Milvian Bridge in 312 CE, from which he had reportedly received visions of the night prior, should he follow Christ, Constantine began incorporating elements of Christianity with that of the Roman Imperial government.

In turn, this created a symbiosis of church and secular authority that furthered the expansion of Christianity throughout the Roman Empire. This revisionism of Christianity would significantly influence the papal bulls of the 15th century, and eventually lead to the formation of the Doctrine of Discovery, the founding documents of the United States Constitution of 18th century, and finally, legal precedent in the 19th century.

Charles and Rah do an enlightening job in arguing how such a dysfunctional theological understanding, originating from the Constantinian Era which contextualized the worship of Christ through Western imperialism, eventually laid the roots for white supremacy to arise through the Doctrine of Discovery.

Due to its adherence to Europeans, who were deemed as more favorable to God, the philosophy created a self-fulfilling privileged class, with its subsequent justification through papal precedence, racializing it as a religious practice. According to Charles and Rah, this led to the considerably dangerous misapplication of Christianity by early European settlers. As such, the Doctrine of Discovery would provide the divinely sanctioned approval for the removal of Indigenous peoples from their land, by callous measures, to make way for the presupposed superior European “race.”

This deeply rooted examination of the systemic mechanisms that led to the powerful influence and exercising of the Doctrine of Discovery is where Unsettling Truths truly excels. While a great degree of literature covers the devastating effects of colonialism, Charles and Rah investigate the psychological and religious apparatuses that allowed for such barbaric exercises in colonialism and expansionism to transpire.

By offering a historical trajectory on the misappropriation of the Christian religion as a tool for conquest, the text persuasively argues that the corruption of Christianity witnessed during this period in Europe, and later that of America, was a vastly different expression of the authenticity of it as a religious denomination. According to Charles and Rah, Jesus Christ, in particular, had no interest in having his followers create an earthly empire that called for the acquisition of land, natural resources, and worldly possessions on his behalf.

There are some points in the book that do become repetitive. However, Charles and Rah are attempting to remind the reader of the extensively explicit nature from which our founding legal structures as a country have been inherently and openly racist from its origins. Their deconstruction of the mythos surrounding American exceptionalism is undoubtedly refreshing to read, and will surely repudiate readers whose philosophical stance supports it. Despite this divisiveness, their arguments are backed by significant historical examples, bringing to question the validity of the philosophy encompassing exceptionalism itself.

Knowing that many of their ancestors were complicit in such heinous acts of violence and oppression, how does that reverse form of trauma manifest itself in our contemporary world? The authors suggest pursuance of a reconciliation process to diminish the effects on generations of non-Indigenous individuals influenced by the acceptance of a dysfunctional imagined history that remains disconnected from that of factual history.

Furthermore, Charles and Rah raise a striking question on the nature of America’s preconceived covenant with God, which remained a primary force for the propagation of Manifest Destiny. Following through on the accordance of the Bible, Charles and Rah share references that point to America having never formulated such a covenant, significantly diminishing the notion of American exceptionalism when envisioned through a theological framework. In staying the course, the two directly confront American exceptionalism and its origins in religion as only another foolhardy exercise to steal land from and violently oppress the Indigenous inhabitants, arrogantly conflicting with the original teachings of Jesus in rejecting earthly materialism.

Fully aware that many individuals in America continue to subscribe to the dysfunctional theological understanding of its historical place as a country, Charles and Rah establish a sincere exploration of the dangers that can occur provided the confluence of religion and nation-building. The atrocities that occurred in America’s pursuit of conquest over the entire continent had a foundation in the Doctrine of Discovery, leading the way for white supremacy in coveting legal and spiritual precedence.

Similar to Constantine’s quest for worldly power through the guise of religion, America’s history has proven to have done the same, continuing the imperialistic endeavors implemented so long ago.

Staying true to its title, Unsettling Truths accurately conveys the difficulties and discomfort that this country must undertake to rectify our violent, tragic, and conflicting past.