Kaplan Bunce, Apache wood-worker, and a mural artist, was born and raised in Washington State. Since he moved to Kaua’i, Hawaii over a decade ago, Bunce has experienced a steady affinity with Hawaiian culture. 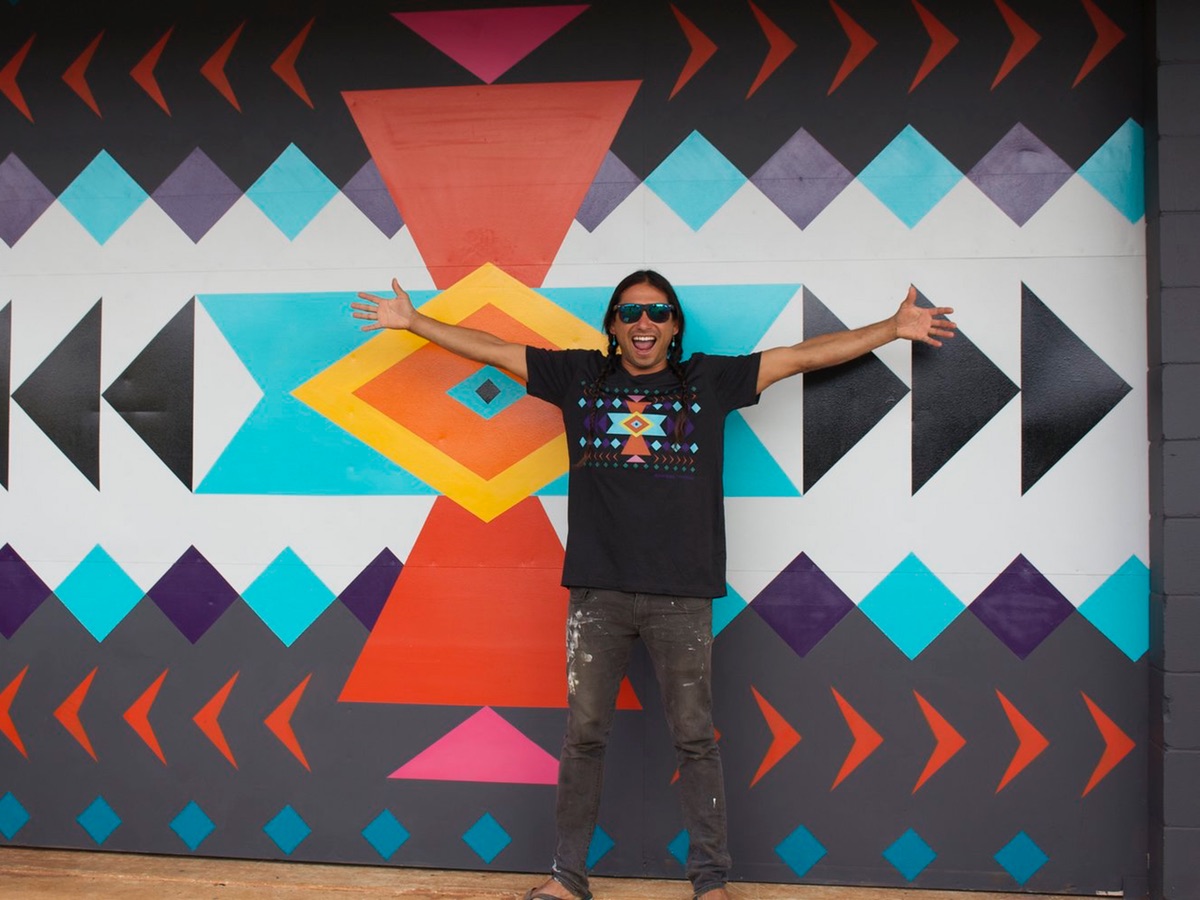 Kaplan Bunce, Apache wood-worker, and a mural artist, was born and raised in Washington State. Since he moved to Kaua’i, Hawaii over a decade ago, Bunce has experienced a steady affinity with Hawaiian culture because they share similar qualities with mainland indigenous tribes, such as unification through culture, language, and oral traditions following a history of colonization.

Bunce, whose Apache heritage is tied to Albuquerque, New Mexico, supports his Native heritage by dancing in powwows, raising his two daughters while instilling knowledge of their tribal identities, and reconnecting to indigenous spirituality through the Native American Church. “My life has changed dramatically in a good way,” he said of the effect of indigenous religious traditions on his soul. “My artwork comes from that ceremony.”

Bunce’s first experience with success was by and through wood-working. When constructing aesthetic pieces by hand, he feels a sense of fulfillment. “It’s a human endeavor to create artwork… It’s something really special,” Bunce states. He began dabbling in Native American art designs after injuring himself on the job. “From the time I was a small child, I used to love looking at sand-paintings. I learned later about how a medicine man might travel days for just one color to help a person heal. I thought that was beautiful and pure.”

Bunce first became aware of the international art festival POW! WOW! because of its namesake. Believing the name to be a form of cultural appropriation, he contacted the festival’s founder, Jasper Wong, to have a discussion. In their conversation, the two men shared their accounts of past wrongdoings by the federal government against its citizens. Wong shared the American government’s internment of Asian Americans during World War II, while Bunce responded with the Native Americans’ history of genocide and forced assimilation. The two artists bonded over these accounts. Wong cordially invited Bunce and a fellow street artist to participate in an upcoming POW! WOW! street art project in Long Beach, CA, inviting indigenous artists to redefine the festival with their art. “Honestly, I thought I would have a minimal role. They provided everything. They treated me awesome.” While there, he painted a mural inspired by Southwestern sand-paintings. Bolstered by this taste of success, Bunce decided to pursue further opportunities.

In May of 2017, Bunce found himself in Washington D.C. painting street art alongside fourteen other artists as part of the POW! WOW! mural project. Together they created fifteen murals in the NoMa district. “The heart of colonization is Washington D.C.,” Bunce noted of the U.S. capital city. He reiterated that every part of American soil still belongs to Native people. “I smudge the land before I paint the wall. I honor the ancestors who were there first.”

Bunce’s foray into street art is not without its challenges. He mainly frowns on cultural appropriation and the hypersexualized stereotypes of indigenous people in mainstream media, along with the negative stereotypes that people may have regarding indigenous spiritual practices. “I made a prayer in a ceremony to be a better contributor to my community: one that serves Elders; one that is humble,” he said. “My recent piece was dedicated to Missing and Murdered Indigenous Women. I paint these women in a sacred way. It’s a gentle reminder to the people that Native women should not be exoticized.”

Bunce believes in progressing forward and continues to support self-actualization and reclamation of the indigenous identity alongside his family in Hawaii. He hopes to see indigenous art continue to evolve and grow. “You meet the coolest people out there on the streets. Sometimes you meet people out there who touch your life. My goal is to paint on as many reservations as I can,” he said. “I believe in humanity. I’ve reconciled with my own prejudices. I keep one foot in tradition, one foot moving forward.”