Off the Rez, Seattle’s first and only Native American food truck to date, faced off against thirteen other competitors for the ninth annual 107.7 Taco Truck Challenge over Cinco de Mayo weekend. 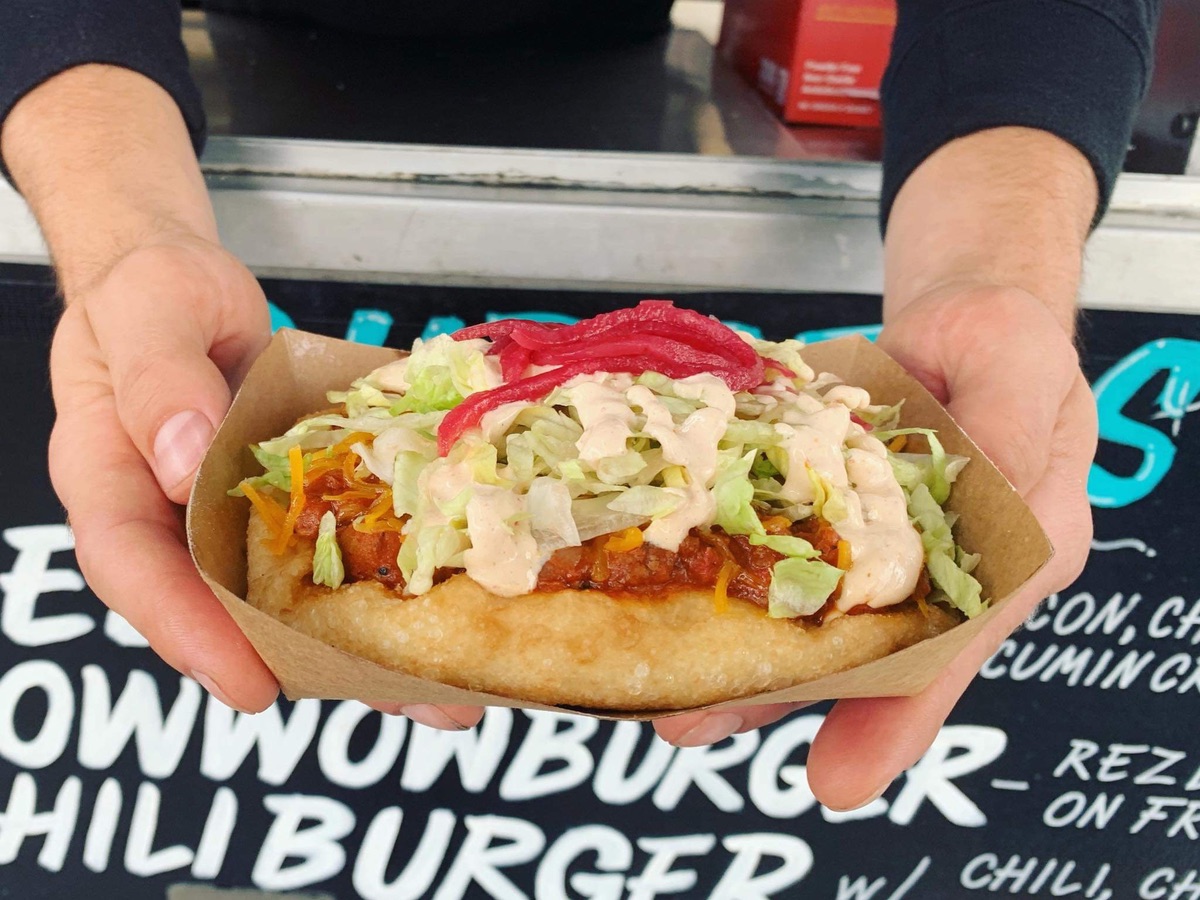 Off the Rez, Seattle’s first and only Native American food truck to date, faced off against thirteen other competitors for the ninth annual 107.7 Taco Truck Challenge over Cinco de Mayo weekend. Armed with over 200 pounds of homemade dough, Off the Rez slung out over 800 Indigenous frybread tacos in six hours at the Seattle Center.

For owners Mark McConnell (Blackfeet Nation) and Cecilia Rikard, it’s their seventh year serving Native traditional food with highly strategic innovation. “We decided that we were gonna do a flavor twist to make Mexican-inspired Indian tacos,” Rikard said. “We decided to have a bit of fun with it.” This year, their Challenge-only menu featured a meat-lover’s chili-marinated, braised beef barbacoa Indian taco with jalapenos and a veggie medley offering of cacti, poblano and corn, relished by zesty avocado salsa and queso fresco. “We like to be really creative with our specials,” Rikard said. The truck’s menu was inspired by McConnell’s mother’s recipes which became the backbone of the dream of starting their Native cuisine business.

It was the second year in a row that the entrepreneurial couple, along with their truck team of family and friends, fought for a shot at victory at the 107.7 Challenge. “Last year I guess we almost won. We were two votes off or something,” McConnell said. “So this year we really wanted to win.”

“We felt confident actually. We just had a huge amount of people coming up to us throughout the day being so positive,” Rikard said. “We actually had a line of probably, like, thirty to forty people deep all day long. We had a number of people come to stand in the line twice because they loved it the first round, so that was super promising to us.”

We had a number of people come to stand in the line twice because they loved it the first round, so that was super promising to us.”

While they have a loyal following who enjoy menu favorites like their Powwow Burgers, some new international visitors were spotted in queue pondering the menu, not knowing what to expect from the turquoise truck painted with a stylized Blackfeet chief in a headdress.

So what did Off the Rez win?

“Mostly bragging rights,” Rikard said, laughing. “We were actually too busy to accept our award.” The duo was presented with champion crowns at the event after all attendees’ votes were tallied. In addition, their dedicated fans were able to vote for Off the Rez in Seattle Magazine’s 2019 Best Restaurants Readers poll.

Off the Rez previously won the Golden Taco Award at the 2014 Taco Libre Truck Showdown. Rikard remarked that local and visiting Native people are often surprised by their menu, for they’ve featured an array of never-before-seen frybread dishes that included frybread ice cream sandwiches, homemade lemon curd topping and banana cream filling in addition to their more traditional menu items, such as frybread with honey or chili beans.“We are super-focused on quality,” Rikard said. “Everything we sell is handmade from scratch by us. We want it to be extra delicious.”

“Everything we sell is handmade from scratch by us. We want it to be extra delicious.”

This year they participated in the 8th annual Taco Libre Showdown on May 18 and engineered some new specials for that challenge. For meat lovers, they served up beer and mustard braised short rib tacos topped with onions and jicama slaw; veg heads enjoyed mushroom chorizo tacos with red salsa, corn salsa and cotija. Though votes weren’t tallied this year, McConnell and Rikard relished in the opportunity to just make great food. “We did have a very busy day and sold out all our tacos, including our specials,” Rikard said. “So it was a success.” The team was soon spotted at Optimism Brewery, drizzling pineapple habanero sauce to kick up the heat in the May Seattle rain; Blackfeet frybread tacos are here to stay in the Emerald City.Off the Rez plans to unveil a venue in Seattle, a tasty secret until this summer. To date, they have dished out their delectables at several Seattle-area businesses, powwows, catered events for local Native tribes, and plan to broaden collaboration with other entrepreneurs. As part of the growing indigenous cuisine revival, their spring victory is a well-deserved reward for their years of creativity and hard work.