The Art and Spirituality Connection in Traditional Tlingit Carving

Wayne Price, Tlingit master wood carver, will soon begin carving a healing totem for a women’s shelter in Juneau, AK. “I heal others through art,” he said. 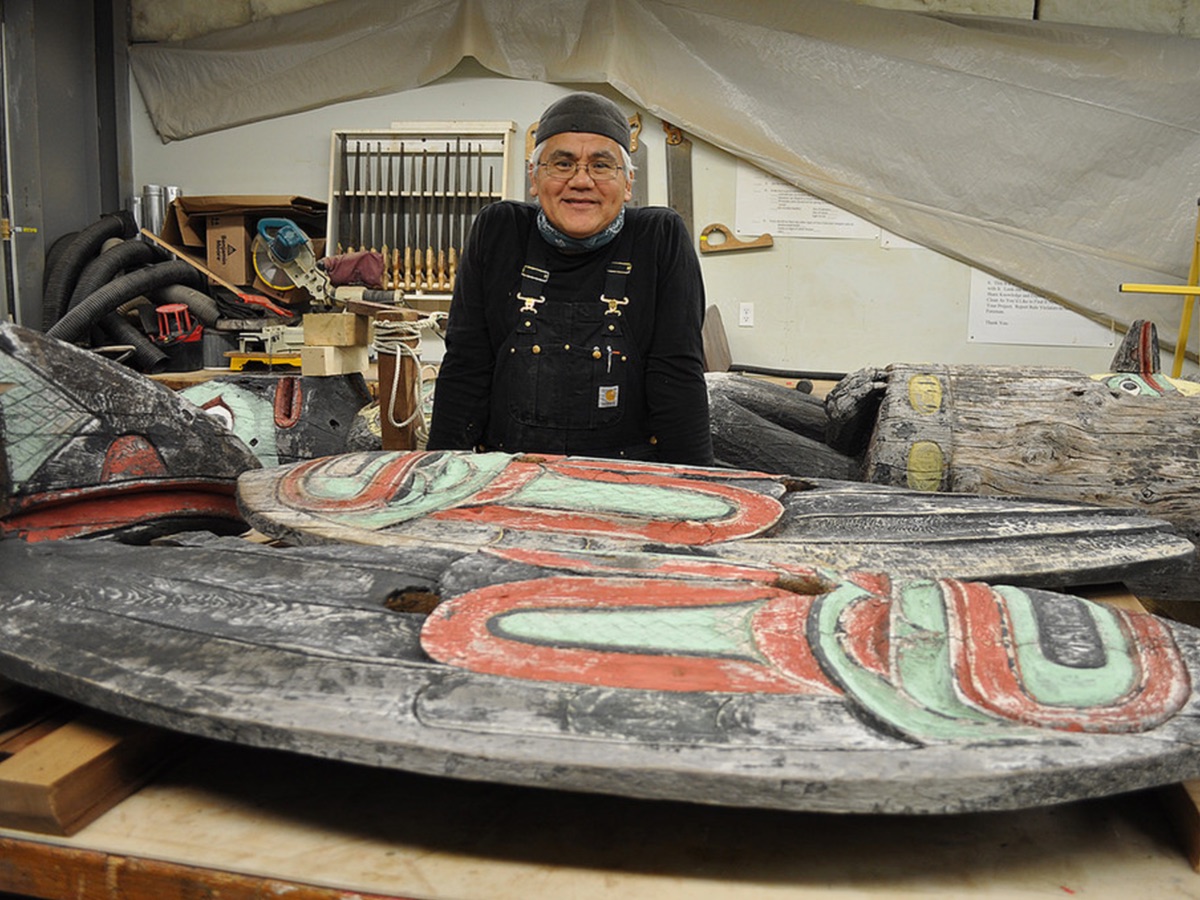 Steven Price returned home to Haines from the Southwest in 2016 to participate as an apprentice carver in Hoonah, AK. After many long months of careful labor, the 40-foot spruce canoe was hauled to the shoreline. Steven, his father, Wayne Price, and a group of apprentices paddled the 40-mile journey to Glacier Bay in one of the largest canoes built in recent memory. This particular journey was in celebration of the Huna Tlingit clan house dedication, which symbolized their ceremonial return to their homelands and the start of a new era of Tlingit art. Of carving, Price joked that he was in still diapers when he first participated in his father’s projects. “I helped carve totem poles, dugout canoes, paddles, and regalia masks,” he said.

Wayne Price, Tlingit master wood carver, will soon begin carving a healing totem for a women’s shelter in Juneau, AK. “I heal others through art,” he said. “Each wood chip we will offer to the totem symbolizes a name for a battered person. We designed a totem that tells a story of a broken trail.” The totem will feature a trail of healing, with a white dove at the top as a symbol of peace. “Ash offerings will be put inside the totem,” Price said. “I carve it so that even if you [don’t] know the story, you would feel a connection.”

The Tlingit people of southeast Alaska, in spite of European colonization and forced assimilation, have been working to preserve their clan system, language, culture, and medicinal ways for decades. Alaska Native people who suffer from addiction, domestic violence, and suicidal ideations continue to experience socioeconomic disparities that may hinder their progression to wellness, sobriety, and stability, according to the Alaska Network on Domestic Violence and Sexual Assault and Indian Health Service.

Price himself began his wellness journey through sweat lodge ceremony fifteen years ago. He experienced a vision to start healing others through his art. “I didn’t feel good about my work at first,” he said. Though he already knew how to carve, having done apprenticeships with other indigenous artists, he continued strengthening his craft. Today, he is one of a handful of Tlingit master wood carvers who can expertly carve dugout canoes, in addition to totem poles, drums, regalia, and masks. As project leader of North Tide Canoe Kwáan, he leads carving projects with people in recovery from violence, depression, or addiction. “We have to step away from the mind-changers,” Price said about alcohol and drugs. “We had no need for them in the past. That’s not who we are. A lie told a thousand times becomes believable. Colonization has taken everything.”

The process of carving a Tlingit dugout canoe is a sacred tradition. Members from specific Tlingit clans meet in ceremony at the tree to bless it and give thanks for offering its’ life. After the carvers and the newly harvested log are blessed, only then can carving begin. “We thank the Stand Tall for giving its life,” Price said of trees selected for canoe journeys. “We make a pledge to give it a new life as a canoe.”

Each process of the canoe carving is painstakingly overseen by Price. “Lives depend on our dugout. When those lives go out on the water, they have to be safe. They also have the ability to sail.” He also has a firm set of rules: “You have to be of the right mind; you must carve your own paddle; you have to be without alcohol or drugs during the journey. It takes all of us working together to make it safely to the beach.”

Price, along with other local Tlingit artists, has vocally challenged the authenticity of local Native artwork in Haines and southeast Alaska. Native-style art is being created by non-Native artists and sold for profit. Because many Tlingit designs are clan-owned, Tlingit-born artists claim that the right to create traditional art should rest solely with them instead of non-Native artists. Younger artists have also spoken out against unwelcome competition between their homemade art and mass-produced trinkets and décor sold at local shops. The Indian Arts and Crafts Act prohibits misrepresentation in the marketing of Indian arts and crafts. A relevant federal case involving counterfeit Indian jewelry and crafts is now unfolding in the Southwest. However, there are limitations: it is still legal to use indigenous art designs without attribution. There are no copyright laws that govern traditional indigenous designs and culture.

Because of this loophole in legislation, Price and local artists have spoken out against a local brewery’s use of Native-inspired art designs to market their alcoholic beverages. Price expects that if one brewery does it, the rest will follow suit. This problem arose in light of the 2016 legal settlement filed by the Navajo Nation against Urban Outfitters, which in turn resurrected complex issues associated with trademarking indigenous art.

In spite of these problems, Price believes that there is a positive cultural shift in the way local indigenous artists are perceived. New waves of young artists are helping Alaska Native master artists gain a stronger voice due to an increase in apprenticeships. He believes that traditional canoe journeys through the Alaskan wilderness in addition to positive role models will continue to guide his people toward new roles and hopeful directions in their lives. All of us have that little spark inside us. There will be support there. There will be young people interested in that,” Price said. “Some of the villages are like third world countries up here. When we brought the canoes, it was uplifting to the community. There’s always a call for me to go again. There’s a real hunger for that. I would share that with any culture that wants to learn to bring about a change in their place. I’ve seen it work, and it will work for them.”