Voices for Those Who Have Been Silenced: Missing and Murdered Indigenous Women

Examining the issue of missing American Indian women throughout the United States. 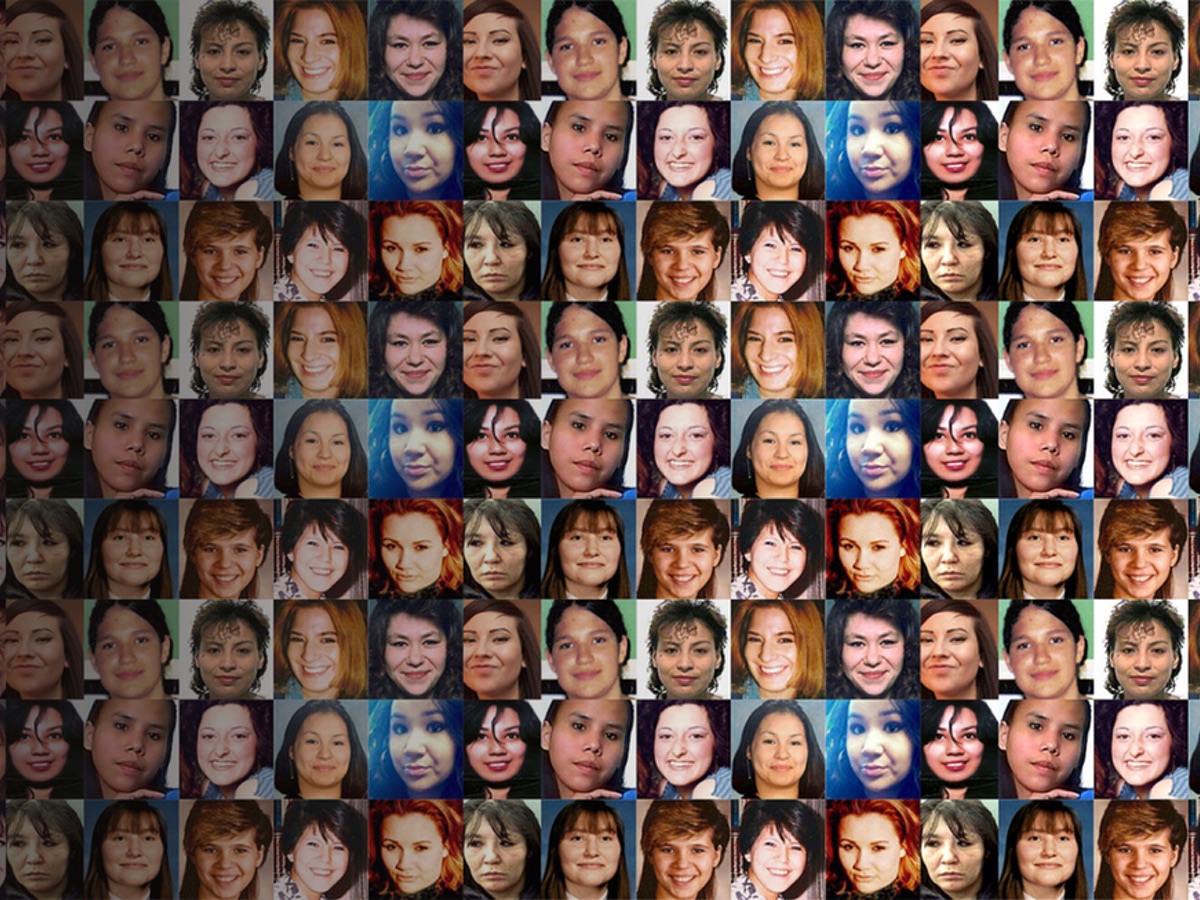 As human beings, Native Americans have the rights to happiness, safety and longevity,  as does the remainder of America. However, for those families of missing tribal members closure is never granted and grief is prolonged. Due to unnatural deaths and missing persons cases that plague tribal communities, Native Americans are denied safety and peace of mind across the United States and Canada.

There are no accurate records of the number of indigenous women having gone missing to date, though it is thought to number in the thousands. An additional unknown statistic is how many of the missing are deceased. For decades we lacked tracking data to survey the number of missing and murdered indigenous people in Canada and the United States. Most homicide and missing person cases involving indigenous people receive little to no publicity in the media, even today.

There are no accurate records of the number of indigenous women having gone missing to date, though it is thought to number in the thousands.

The task of investigating these crimes can be riddled with complications. Cases often go cold which may be due to inadequate or delayed responses by the appropriate authorities, inter-jurisdictional lack of cooperation, lack of resources, or lack of evidence needed for prosecution. Further complications arise if such cases go to trial. In a 2010 Government Accountability Office report, United States Attorneys declined to prosecute nearly 52 percent of violent crimes that occur in Indian country. Extrapolate that for every state.

Legal loopholes surrounding the inter-jurisdictional boundaries allowed many non-Indian offenders immunity from their crimes in Indian Country, compromising the safety of American Indian and Alaska Native residents, according to a 2016 report by the National Institute of Justice. This problem was partially corrected due to The Violence Against Women Reauthorization Act of 2013, which provided federally recognized tribes the allowance to prosecute non-Indian offenders in some instances.

After the 2016 abduction and murder of 11-year-old Ashlynne Mike on the Navajo Nation, U.S. Sen. John McCain, R-Arizona, sponsored a bipartisan bill AMBER Alert in Indian Country Act which unanimously passed a Senate vote in 2017. “When a child is abducted or goes missing, law enforcement relies on AMBER Alert systems to help bring them to safety,” said U.S. Sen. Heidi Heitkamp, D-North Dakota, co-sponsor of the bill. “Across the nation, when such alerts do exist in Indian Country, they’re often limited to tribal lands and don’t reach the public and law enforcement beyond the reservation—a vulnerability criminals can too easily exploit.… Traffickers and abductors must know they cannot go off the grid in Indian Country.”

To date, this measure is still pending a House vote.

Sen. Heitkamp also sponsored a Senate bill known as Savanna’s Act, which is currently pending a Senate vote. Named in memory of Savanna LaFontaine-Greywind, a member of the Spirit Lake Dakota tribe who was brutally murdered earlier this year, the bill “would help improve information sharing, data collection, and response protocols for all levels of law enforcement.” The tragic case of Greywind’s violent death brought public attention to a glaring issue: Why didn’t investigative authorities rally to search for Greywind, who was also pregnant at the time of her disappearance? In turn, Native Americans asked each other, “Is it because she was Native?”

This is where indigenous advocacy groups and activists question the nature of America’s justice system. Innumerable questions plagued Deborah Denton in the months after two Navajo friends of hers were murdered in Gallup, New Mexico, which is a border town near the Navajo Nation and the Pueblo of Zuni. Denton, the head of the Portland-based volunteer organization called Missing and Murdered Indigenous Women USA (MMIW USA), recalled the beginning of the group’s efforts to publicize missing reports and homicide cases of indigenous women and girls in the Pacific Northwest and the greater United States in 2015. Inspired by the Missing and Murdered Indigenous Women project in Canada, MMIW, Denton decided to follow through with her plans to start a non-profit organization.  “Nobody had heard of us,” she said. “That was the biggest thing. Within the other groups of women that were looking at missing women, we were the only ones that were interested in posting on [them] and keeping updates.”

Denton says that of the scores of cases she and eight other volunteers publicize, only a few receive public media attention.  “Not all media in Portland are willing to take on these cases. We are grateful to the KBOO radio station for helping us get the message out. Most local stations [in Portland] don’t return any of our correspondence. We say, ‘Why are you letting this go and not looking into it?’”

MMIW USA recently aided in a missing child case by working remotely to navigate inter-jurisdictional boundaries between Oklahoma’s tribal police departments and South Dakota’s police departments. Denton was contacted by a woman whose 14-year-old daughter had been picked up by a female stranger who had gained the girl’s trust. The pair then traveled to Oklahoma. The mother messaged MMIW USA after receiving clandestine text messages from her daughter. “There was no coordination or communication between [tribal] police and state police,” Denton said of the inter-jurisdictional issues. “Law enforcement did not see us as being a high priority.” She explained that it was due to MMIW USA’s persistence and urgency in submitting tips to law enforcement that authorities were able to locate the address and take ward custody of the girl.

The teenager’s family soon ran into another problem. The mother did not have the money for an interstate trip to pick up her daughter. Acting quickly, MMIW USA coordinated with the National Runaway Safeline who then successfully funded the mother’s trip to Oklahoma to safely regain custody of her daughter. “They were the second entity I called,” Denton said. “The first organization I called wouldn’t help.” Currently, the group operates using a Facebook account and has approximately 7,000 followers.

The MMIW USA group is not the only entity dedicated to advocating and aiding missing and murdered indigenous people in North America. In recent years, Canada has taken center stage for their efforts to bring this dire issue into focus. This is possible with the help of such organizations and movements like the Native Women’s Association of Canada, No More Stolen Sisters, and Project E-PANA. Community-based activist groups like Families of Sisters in Spirit and No More Silence have also contributed to efforts to solve these homicide cases and disappearances. Though these efforts have been well-publicized, the United States has been slower in their response to the abduction and murder crises in Indian Country.

The MMIW USA group is not the only entity dedicated to advocating and aiding missing and murdered indigenous people in North America. In recent years, Canada has taken center stage for their efforts to bring this dire issue into focus.

In September, a free mobile app called, Taken Knowledge Keeper, was released on iOS. Geared toward indigenous Canadian users, the app features a missing person toolkit for creating an action plan that consists of a checklist of steps to take if a loved one goes missing.

It also offers tips on working with public media in addition tips for creating posters. Bernadette Smith, the co-founder of both the Coalition of Families of Missing and Murdered Women in Manitoba (CFMMWM) and the Drag the Red Initiative, contributed to developing the app’s toolkit content along with family members of other victims.

The worrying issues of our nation’s indigenous women and girls are aggravated by other societal ailments specific to the tribes, such as bordertown racism, domestic violence, alcoholism, drug abuse, mental illness, and neglect. “After [my Gallup friends] died, what freaked me out were the people’s reactions,” Denton said. “Nobody acted bothered or surprised. It was because they were used to it. It’s unthinkable off-reservation. It’s happened so many times they are desensitized. It’s generational trauma.”

This is not something we can afford to let our souls ignore any longer.